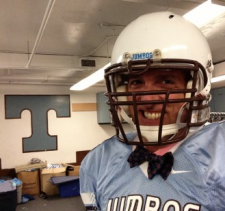 Lee Coffin, Dean of Undergraduate Admissions and Enrollment Management at Tufts University in Medford, Massachusetts, is having a George Plimpton moment.  Plimpton was a writer famous for his "participatory journalism" which included suiting up for the preseason with the Detroit Lions. Coffin, along with Assistant Director of Admissions Justin Pike, followed suit and donned a full set of gear -- with his bowtie peeking out -- to join the Jumbos for a preseason practice session.

Read the entire post -- Oh, Snap! -- here about his brief tenure as part of the offensive line, special teams and sprint training. "My sanity wasn't tested so much as my stamina!  I had no idea that football players needed so much aerobic capacity!" said the 167-pound Coffin.

Last week's foray onto the football field is just the first exploit by Coffin and his cohorts as part of "The EX Factor” -- a new series that examines the value of extracurricular activities in the admissions process and in the Tufts community.  And in the style of George Plimpton, Coffin will continue to share his experiences via "participatory blogging" as he goes “undercover” in various Tufts activities.

Coffin and the admission office are actively soliciting invitations from various Jumbo clubs and organizations for his next EX gig.  Among the contenders so far are mock trial, gospel choir, and the hybrid racing team. In the tradition of Plimptonesque escapades, how about some standup or a stint with the orchestra?

But, seriously, this is a terrific idea and a great peek behind the curtain for both the admission office and prospective students who wonder what life on campus may be like. And, by the way, the Tufts admission office runs a terrific blog, a great way to learn more about a school and what they are looking for in admission. Take a look here. And, in the meantime, stay tuned for Dean Coffin's further adventures!