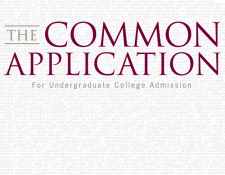 Earlier this week the Common Application board of directors announced changes to the "Writing" section of the online form as part of the digital makeover to occur in August. High school students applying from the class of 2014 will choose from five new essay prompts and will no longer have the option of writing on the "topic of your choice." In addition, the maximum length for responses increases to 650 words.

Here are the new essay prompts:

*             Some students have a background or story that is so central to their identity that they believe their application would be incomplete      without it. If this sounds like you, then please share your story.

*             Recount an incident or time when you experienced failure. How did it affect you, and what lessons did you learn?

*             Reflect on a time when you challenged a belief or idea. What prompted you to act? Would you make the same decision again?

*             Describe a place or environment where you are perfectly content. What do you do or   experience there, and why is it meaningful to you?

*             Discuss an accomplishment or event, formal or informal, that marked your transition from childhood to adulthood within your culture, community, or family.

The announcement that the Common App would remove the "topic of your choice" prompt was made last fall at the annual conference of the National Association for College Admission Counseling and was "met with gasps, as reported by The Chronicle of Higher Education. Some counselors felt that the open-ended freedom of that prompt gave students an opportunity to exercise their creativity. But as Scott Anderson, the Common App's Director of Outreach, explains "For the last few years, two of our six essay prompts -- 'topic of your choice' and 'significant experience' -- have accounted for over 70% of all essays. That clustering prompted us to ask: Can we make our prompts more appealing and, by extension, more effective, both as an invitation for students to share their stories and as a tool for helping our members make informed decisions?"

Ralph Figueroa, Dean of College Guidance at New Mexico's Albuquerque Academy, was one of the 15 counselors who served on the Common App's Outreach Advisory Committee. Their charge, he says, was "to think about new topics, to see if we could come up with prompts that would do a better job of appealing to a wide range of students."

Alice Kleeman, college advisor at northern California's Menlo Atherton High School, was one of those who initially resisted the idea of eliminating "topic of your choice," but has since reconsidered. "Now that I've seen the new prompts and challenged myself to think of topics a student might want to address that wouldn't fit any of the new prompts, I haven't been able to come up with one! The topics were generated by a group of incredibly thoughtful and experienced people who must have posed the same challenge to themselves as they grappled with the possibilities."

Students will have more room to express themselves at the new 650-word limit. But that word limit will be strictly enforced by the new technology of the upcoming makeover of the Common App. In the past, the 500-word "limit" was actually a guideline, and many students submitted up to 800 or even 1,000 words. With the new online form, students will enter their responses into a window that will enforce the limit. In addition, the form will not accept a response shorter than 250 words.

College advisor Kleeman, for one, plans to encourage her students to see what they can do within a 500-word limit anyway. "Many colleges were unenthusiastic about increasing the limit, and I'd like my students to respect college readers' time," she says. "I've also noticed that students often write incredibly wordy essays, where unnecessary words (not thoughts!) and meaningless phrases (not concepts!) are easy to cut without sacrificing the message."

Our discussion of the changes to the 2013-2014 Common Application continues over the next week with Q&A's with the Common Application Director of Outreach Scott Anderson and Outreach Advisory Committee member Ralph Figueroa, as well as comments from Vice President for Enrollment at University of Connecticut Wayne Locust and more. And there will be a post from advisor Alice Kleeman providing examples of possible topics that respond to each of the new prompts.