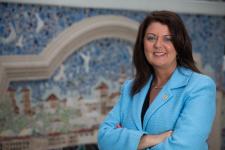 Flagler College is one of the younger private liberal arts colleges, located in the oldest city in America. Founded in 1968, Flagler is located in the heart of St. Augustine, Florida, which was founded in 1565 by the Spanish -- 42 years before Jamestown and 55 years prior to the landing at Plymouth Rock.

The centerpiece of the 42-acre campus is the former Hotel Ponce de Leon, a grand resort built in 1888 by Henry Flagler, on the grounds of a former orange grove.  Today, the fully restored building, added to the National Historic Register in 1975, is considered a masterpiece of Spanish Renaissance architecture with beautiful grounds, hand-carved wood, imported marble, elaborate murals, and Tiffany stained glass windows, housing a women's residence hall, as well as administrative departments. If you're not lucky enough to get a room there, there are four other residence halls on the campus, as well as a library, a student center, an auditorium, a gymnasium, an art museum, and a laboratory and radio station for the Communication Department. And four of those buildings are historic structures as well.

This picturesque campus is home to more than 2,800 students, who come from Florida and 43 other states, as well as 38 foreign countries. Students choose from twenty-nine majors and thirty-four minors in eleven departments, including Art & Design, Business Administration, Communication, Education, English, Humanities, Math & Technology, Natural Sciences, Social Sciences, Sport Management and Theatre Arts. The student-to-faculty ratio is just 20:1, and nearly every class at Flagler has fewer than 30 students. The most popular majors for students in the Class of 2012 were in Business, Management, and Marketing and Related Support Services; Communications and Journalism; Psychology; and the Visual and Performing Arts.

When not in the classroom, students can choose among more than 30 student clubs and organizations, including Glee Club, the student-run newspaper The Gargoyle, Surf Club, Catholic College Fellowship, the Ink Slingers for creative writers, the Gaming Guild for video and board game enthusiasts as well as card sharks, College Republicans and Best Buddies, which teams students with intellectually disabled individuals.

And aside from the advantageous location just four miles from the Atlantic Ocean, just south of Jacksonville and just north of Daytona Beach, Flagler College offers admitted students a unique Florida perk -- a trip to Disney World as part of Orientation at the beginning of the year!

Please join Deborah Thompson, Vice President for Enrollment Management at Flagler College, to learn more about this Florida liberal arts campus, its low-cost financial model, the kind of student who thrives there and her best advice for applicants.

What kind of student does well at Flagler College? How would you describe the student body?

The type of student that will excel at Flagler College is a student that enjoys being in a community that values active learning and has a bit of an explorer's spirit. A student who is highly motivated and eager to be challenged but in a supportive environment and appreciative of the personal nature a small school like Flagler has to offer. A student who wants to be known and to know their professors and classmates. A student who wants to be challenged to live up to high standards in and out of the classroom and will enjoy the unique location of the nation's oldest city and beach environment.

How does Flagler College read applications?

Flagler reads applications from an holistic perspective. We look at courses taken in high school - how the student challenged himself or herself as well as the final grade received. This element is most predictive of how well the student will do as a Flagler student. We are looking for good extracurricular involvement and leadership, as well as a well written and developed essay that helps us get to know the student. Standardized test scores are also required.

What is your best application advice for students?

The best advice I can give to a student who is applying to Flagler College is to VISIT the campus. The student will have an opportunity to meet current Flagler students, sit in on a class, tour the beautiful historic campus, and have lunch with a faculty member in our dining hall which may remind them of the Great Hall in Hogwarts from Harry Potter.

I am concerned about the cost of higher education. Flagler College is an institution that has a different approach to the cost model compared to most colleges and universities in the U.S. We use a low cost low financial aid model and Flagler has maintained that commitment throughout its history. Families have a much clearer picture from the start of the admission process of the financial commitment involved.  Flagler's tuition is $16,180 per year and did not increase this year.  While Flagler handles the affordability issue in a very responsible manner, I continue to have concerns about the majority of higher education and the way they are approaching the cost issue.

What is your favorite thing about Flagler College?

My favorite thing about Flagler College is its commitment to high standards --for academic achievement, respect, civility and stewardship. When you step onto our campus you will be struck by this spirit whether it is in the interaction with students you meet or the overwhelming beauty of the Ponce Hall which was built in 1888 and has been meticulously maintained by the College. The investment that our faculty make in providing a highly engaging and challenging learning community reflects the college's commitment to high standards. We handle the relationships and the history that are entrusted to us with care and respect.