Answers to Your Questions on a Gap Year 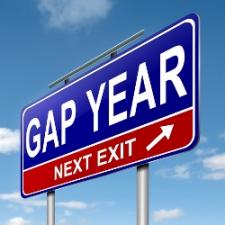 Holly:  When I say "program" to students, it can mean: a job they include in their gap year plans; options like WWOOF where housing and food is offered in exchange for labor;  internships or volunteer placements covering basic expenses (where students are with other volunteers but not necessarily American peers); skill-based options where you pay a fee for training (again not necessarily just with peers); and group programs specifically set up for gap year students which usually involve being with peers and paying an overarching fee or tuition. In the first three types of options, students are quite independent and not spending a lot of money on a placement aside from airfare to far-away places. For example, one can do conservation work in Australia with a group of international volunteers, or help in animal sanctuaries in Thailand or South Africa with volunteers of all ages, or teach English in schools in Chile or help in sustainable development centers in Costa Rica. Students can also travel as part of a gap year but this can become a lonely endeavor after a while and also tends to cost more.

Bob:  As this question suggests, there are gap year opportunities for many different kinds of experiences.  The important thing is to be very intentional about what it is that you want to get out of your gap year (developing more independence, learning about a specific field, doing volunteer work in an important area, “seeing the world,” etc.) and finding programs or experiences that will fit that need.  There are many different opportunities that entail different levels of independence to pursue them.

Juniors and seniors tend to be a handful on all levels--especially children with independent minds and spirits. (Gap year types!!!!) By the time spring of senior year rolls around, many parents are tired of the planning, projecting , problem-solving, discussing  finances, etc. GAP years can extend all of the above.  Sending a child off to college directly can feel easier and more liberating for some.  So, in short:  how can a GAP experience (with more planning, calls, family discussions, financing, organization) benefit family relations, welfare and household energy?

Holly:  As a gap year counselor, I see a marked shift in the dynamics between parents and students because students are very quickly driving the engine. They own the process more, especially if they are keen to do the gap year and like the options available. Often the energy and atmosphere around gap-year planning (a lot of excitement) is quite different from that of college planning (potentially more of a chore). Still, you can't get away from a certain amount of planning and college might well seem easier! And students change during a gap year so plans also change even through the year itself (more planning) but all I can tell you is that it's so worth the extra effort. Especially if you have a child who does not seem to be fully eager to head right on to four more years of schooling.

Bob:  I agree with Holly.  When thinking about and planning a gap year experience, this is the time for the parents to back off and let the student take ownership of the process.  For many, that is really the point of taking a gap year: Having the experience be completely self-directed, and have it be based upon the interests, passions, and talents of the person actually doing it.  I have also known many students who actually raised their own funding for their gap year experience, and there has even been at least one short book written on the subject (Ticket to Ride, by Hila Shooter).  Allowing the student to develop this sense of autonomy will also carry them far once they go to college.

With gap year programs (such as the Young Judea program ) that offer college credit (in some cases up to 30 hours), do colleges accept these credits and what does it mean for a student's deferred status, in that they are no longer an entering freshman?

Holly:  There are a number of gap-year programs that offer college credit from various universities around the US. The issue, however, is whether the college the student plans to attend will grant transfer credit. You have to ask each college you are considering. Some are quite clear that you cannot come in as anything but a freshman and that transfer credits will make you lose your freshman status. Others seem not to be so particular and will grant some transfer credit. When in doubt, ask!

Bob:  Yes, there are a wide variety of answers to this question of college credit.  However, in most cases it is unlikely that students who had taken a gap year and received some credit will be able to graduate earlier than others who didn’t.  In general, I would also say that receiving college credit should not be the primary motive for taking a gap year.  This is an opportunity to step off the educational tread mill and do something different.

Can taking a gap year affect a student's application if they apply while doing the program (rather than apply senior year and defer). Some parents think that doing a gap year might affect their students choice set (as in improve it).  Although the student has likely grown/matured, the student is still applying with the same grades and test scores, so the impact should be minimal, correct?

Holly:  Taking a gap year does not usually hurt one's college application chances and often can help. Colleges are aware that the student will probably be more mature, focused and a better student (in terms of GPA.) I normally recommend that students apply during senior year and ask for a deferral if they get into a college of their choice. Most colleges will grant deferrals and it can be easier on students and parents to have this settled before the gap year. There are students, however, who choose to apply after their fall gap year experience and colleges are then able to see full senior year transcripts and hear what they have done and plan to do during the gap year. Students often speak in a more interesting and focused way on essays after getting fired up about their fall experience and the gap year in general; it can be a different voice coming through that is quite compelling. I have worked with quite a few students who asserted that their gap year definitely helped them gain admittance to colleges who did not consider them before their gap year. It's not a guarantee but it can help. I have also worked with students whose grades slumped during senior year and they opted for an academic program in the fall of their gap year (not necessarily for credit) so that they can show colleges another semester of improved grades and evaluations.

Bob:  Having been at the college end of the admissions process for many years, I do know of a few students whose candidacies have been enhanced by taking a gap year.  But in my experience, those are the exceptions and not the rule, and in most cases I think that students are better off putting the admissions process behind them and focusing on something different.  Getting admitted into a more selective college should never be the primary motive for taking a gap year, since in most cases it will not have a significant impact.

What happens if a student applies to a college, is accepted, and takes the gap year, but then decides not to go to that college?

Holly:  This is an interesting question because the gap year option in the US is still relatively new but there are more American students taking gap years and doing just what you outline. I believe the colleges are trying to figure out how to grapple with this issue as they sort out admissions numbers. Some have talked about instituting a second deposit to help students decide sooner rather than later if they are, indeed, attending their deferred choice.

Bob:  It is a very significant issue, and the important thing is for the student to be honest as early as possible about his or her actual level of interest in attending the college that is saving a spot for them.  Colleges will have different policies in regard to whether they or not they can allow a student for whom they are holding a seat to apply to other colleges, so it is important to ask what those policies are and adhere to them.  Sometimes the college will be fine with it; other times they may ask the student to re-apply during the gap year.  I know of one student who deposited at one college to save his seat, then decided to apply to another college during his gap year without telling the college where he had deposited and then was admitted to the new college.  The student ended up having both of his offers of admissions rescinded because he had not been honest with the first institution.

What questions should a student ask the college when thinking about a gap year? What's important for the student to know about a college's policy?

Holly:  The first question is whether the college offers the possibility of deferring enrollment and the second is whether transferred college credit is a possibility or not. Most colleges seem not to ask for all the details about a planned gap year but they do want some sense of what a student has in mind and why.

Bob:  I agree with Holly.  Also, for students receiving financial assistance of any kind (either need-based or merit-based), it is important to find out if that assistance is transferable to the following year.  Usually it is with need-based aid (although the family will need to re-submit FAFSA and/or other forms for the following year), but not all merit-based aid will be transferable.

Holly Bull is president of Interim, an independent gap year counseling service. She took a gap year before and during college, volunteering at an aquaculture research institute in Hawaii, attending two academic cultural study semesters in Greece, traveling in India and Nepal, and doing service work in Appalachia. Holly has placed more than a thousand students in gap year programs worldwide. She is a graduate of the University of Virginia and holds a Masters in Education from Harvard’s Graduate School of Education.