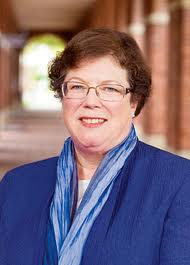 Katharine Harrington, Vice President of Admissions and Planning at University of Southern California, joins us this month to answer five questions about the private research university in Los Angeles, California.

USC's location in the heart of Los Angeles, just 3 miles southwest of downtown, inextricably entwines the school with the country's second largest city -- and its history. The southwest corner of the Pueblo of Los Angeles, the original land grant given by the King of Spain in 1781, is at Figueroa Street and Exposition Boulevard, across the street from USC. The 226-acre University Park campus is home to the Dana and David Dornsife College of Letters, Arts, and Sciences, as well as many of its professional schools including the School of Architecture, School of Cinematic Arts, the Annenberg School for Communication and Journalism, and the Marshall School of Business.  The Staples Center, Los Angeles Coliseum and Shrine Auditorium are within walking distance of the park-like campus.  The school's classic architecture has been the backdrop for a host of feature films and television shows, including Legally Blonde, Forrest Gump, DieHard 4, Beverly Hills 90210, and Charlie's Angels.

Founded in 1880, USC first opened its doors to 53 students with a faculty of 10 teachers. Today, a full-time faculty of 3,400 serves more than 18,000 undergraduates and 22,000 graduate and professional students. With more than 30 academic departments in the Dornsife College of Letters, Arts and Sciences and 17 professional schools, undergraduates can choose among more than 150 majors. Students can also choose among more than 750 campus organizations for involvement outside the classroom -- academic, performance, political, religious, service and social groups.

The USC Trojans compete in the NCAA Pacific-12 Conference. USC has won the National Collegiate All-Sports Championship — an annual ranking by USA Today of the country’s top men’s athletic programs — 6 times since its inception in 1971. Trojan men's teams have won 81 NCAA championships and 94 national championships. USC's women's teams hold 23 national titles, all since 1976. In addition, the schools boasts 60 student-run clubs with 2500+ active members in their California Club Sports Program.

*             The Academy of Motion Picture Arts and Sciences has nominated at least one USC alumnus every year since the inception of the Academy Awards in 1929.

As Vice President of Admissions and Planning, Katharine Harrington oversees both admission and financial aid at USC. Join her here to learn more about this West Coast university, the kind of students that thrive there, her thoughts about the role of the essay in admission, and the admission-related issues that keep her up at night:

What is the future direction of the University of Southern California?

One of the things that is unique about USC is the collection of professional schools and schools of the arts that complement our Dana and David Dornsife College of Letters, Arts and Sciences, which offers instruction in the humanities, the natural sciences and the social sciences, leading to bachelor of arts and bachelor of science degrees. And of course we are located in the heart of Los Angeles - the U.S. gateway to the Pacific Rim.  As for the future, I expect USC will continue to aggressively innovate the undergraduate experience so that we continue to prepare our students for a lifetime of personal and professional success.

What kind of student does well at USC? How would you describe the student body?  What would you most want an applicant to the school to know?

USC is a very diverse place. We have students from all over the country and all over the world. Only about 35% of the fall 2012 freshman class are from Southern California. More than 10% are international students. Twelve and a half percent are from the east coast. We have 49 states and more than 30 countries represented in the freshman class. And about 13% of these students are the first generation in their families to go to college. So students at USC are very diverse. They come from different parts of the country and different parts of the world. They come from different life experiences, and they have very diverse academic and co-curricular interests. In fact, just under half of our students are taking their major in our Dornsife College. The others are studying architecture, business, engineering, fine arts, communication and journalism, theatre, public policy, music, and cinematic arts.

As different as these students are, there are some characteristics that are shared. USC undergraduate students are smart, ambitious (and I mean this in the very best sense of the word), energetic, and they care about things other than themselves. They are people who are engaged in the world.

In light of the new Common Application essay prompts, would you comment on the role of the essay in the admission decision?

I know, I know. And I may have a somewhat unusual take on this. I think colleges have always looked for “non-cognitive” measures in the admission process. We may not have used such a fancy term for it, but honestly, when we talk about “fit” that is what we are talking about. What are the characteristics that we cannot easily measure, that contribute to success in college.

Eric Hoover of the Chronicle of Higher Education wrote a very interesting article recently about exactly this. And in that article he refers to some of the research being done by neuroscientists at USC who are looking at the extent to which things like factual knowledge and the ability to reason through difficult problems are interwoven with less tangible characteristics like a moral compass.

From the perspective of the student who is completing an application, it all comes back to, “your college application should reveal your true self." It doesn’t do any good to “game” the system if what you are doing is pretending to be something you think a college is looking for. Imagine how unhappy students would be if they used the application as a way to pretend to be someone they are not, and then got admitted to – and enrolled in a college that thought they were a perfect fit!

Don’t worry about the fancy terminology. Be yourself.

Where to start … I guess I would have to say that I am disturbed by the notion that the salary earned in a first job out of college should be our measure of the value of a college education. Should colleges and universities be accountable for demonstrated learning outcomes? Absolutely! Should there be measureable added value from a college education? Most definitely! Is the salary someone earns in their first job out of college an appropriate measure of the value of a college education? Not if it is the only measure. All the empirical evidence points to education as the engine of social mobility and a civil society. College-educated individuals vote more, smoke less, live longer and are more engaged in the world around them. That is not something that can be measured by the salary earned by a recent college graduate. I’m not saying it’s OK for college graduates to be unemployable. But I am worried that if we look to undergraduate education only as preparation for the first job, a lot of value will go unrecognized. It is a slippery slope that concerns me.