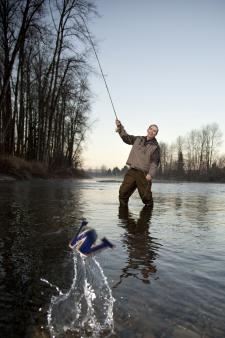 Philip Ballinger is the Assistant Vice President for Enrollment and Director of Admissions for undergraduates at the University of Washington, the Evergreen State's flagship public university. He joins us this month to answer six questions about admissions -- and life -- at "UDub."

Founded in 1861, University of Washington began as a 10-acre campus in what is now the heart of downtown Seattle, the Pacific Northwest's largest city. Today, that campus occupies the "University District" in the city of 609,000, located on the shores of Union and Portage Bays with views of the Cascade Mountain Range.  More than 43,000 students attend UW in its 16 colleges and schools, which offer 1,800 undergraduate courses each quarter in more than 250 degree programs.  (There are also satellite campuses in Tacoma and Bothell.)

Undergraduates can choose from among more than 700 student organizations -- religious, cultural, sports, performance and special interests -- from snowboarding and ski team, Judo and table tennis, to Actuary Club, Unleashed A Capella, photography, and The Society of Pokemon Masters. In addition, there are currently twenty-six IFC fraternities and sororities at UW.  The student newspaper is the second largest daily in the city of Seattle.  And undergraduates can choose from more than 7,000 research opportunities with 270 specialized centers delving into fields from Alzheimer's and Genetic Medicine to Digital Arts and Media, and Transportation.

The University of Washington Huskies participate in the NCAA Division I and Pac-12 Conferences. In addition to fielding competitive teams in football, basketball, swimming, tennis, track and golf, rowing has been a long-standing tradition, with both the men's and women's teams winning national titles. The mascot is "Harry the Husky", but the UW's purple and gold have hosted a long line of actual Alaskan Malamutes as mascots, as well. "Dubs I" currently reigns.

Over the past 5 years, freshmen applications to UW Seattle have increased by nearly 50 percent, with more than 26,000 students applying under regular decision for admission for fall 2012. The acceptance rate was 59%. Eighty percent of UW Seattle undergraduate students are state residents. In 2010‐11, 58 percent of UW undergraduates received some form of financial aid, totaling over $251 million. Half of all UW undergraduates graduate with zero debt. Last year, about 8,000 undergraduates (approximately 25%) were eligible for the Husky Promise program, which through a combination of state, federal and UW funds provides free tuition to students with financial need.

Please join Director of Admissions -- and fly fisherman -- Phil Ballinger to learn more about the University of Washington, its admission process, why "moxie" characterizes UW students, and the Japanese cherry trees on the Quad:

You have a really tough job. Why do you do what you do?

Sometimes the job is hard, but mostly I feel privileged and fortunate.  I have good reason for such feelings.  First, my work allows me a privileged glimpse into the lives of young people.  For the most part, that glimpse is inspiring.  Sometimes I think a new species of humanity is arising.  I find it hopeful.  I also take great satisfaction in affecting and promoting facets of education which will benefit children.  This ranges from promoting wider access to more rigorous studies in high school to ensuring that students always have a full voice in the college application process.  On a more selfish note, I get to work with a lot of smart, interesting people at a University in a great city with an absolutely gorgeous campus.  I think I might want to substitute the word ‘lucky’ for ‘tough’.

What kind of student does well at University of Washington? What would you most want an applicant to the school to know?

I love Westerns…especially those written or filmed in a spare style.  The protagonists of such stories and films are often described as having grit, sand, or backbone – in short, moxie.  My guess is that students who take initiative do well at the UW.  Of course, Washington is such a large and diverse university -- one could argue that every type of human and personality find a niche here.  While this may be true, I think that the UW’s richness in possibilities, diversity, and size are custom-made for students with moxie.  The University of Washington is a premiere, complex, Research I institution without apology.  Creating new knowledge is the beating heart of the place.  Students who are excited by the ‘newness’ of opportunity here, whether in terms of learning through research or experiencing broad diversity of thought and experience in the student body and faculty, will thrive at the UW.  Such an environment calls for students who can and will participate and contribute to the creative process at its heart.  Evidence of these traits is always appreciated when we find it in applications.

You have been recognized as moving the University of Washington to more of a holistic admission system. How do you read applications now?

Yes, this is something of which I am very proud.  For 2013, we received over 30,000 applications for a freshman class of 6,000.  Every one of those applications is read at least twice, and many are read more than twice.  We look not only at grades and test scores, but for context.  What opportunities did a student have in school and community and what advantage did she take of them?  Did he have to swim upstream to attain his education?  Does she lead?  Does he serve?  What talents or experiences will she be inclined to contribute to the UW community?  I think you can already see that the writing sections of the application are very important in this process.  On top of all this, we are very much aware of how important higher education can be for families and greater society, so we are also interested in knowing if a student is the first in a family to go to college or gain a bachelor’s degree.  While higher education is a personal good, it is also very much a social, common good.  Ultimately, our goal is to create a class in which being a student is an education in itself.  Holistic review helps us move towards that goal.

What is your favorite thing about University of Washington?

Impossible to give one answer, but I can attempt to reduce it to three.  First, it is part and parcel of Seattle which is one cool city. Second, Grieg Garden -- I love to pick up a roasted salmon salad to-go at the University Club and then sit in this peaceful place.  Finally, the Quad when the old Japanese cherry trees are in full bloom – magical.

Like many public universities, University of Washington clearly seeks to continue serving the students of Washington State while also bringing in students from around the country and around the world. Can you address this issue?

The University of Washington is the state’s public flagship institution.  Residents of Washington will always have priority in admissions and enrollment at UW.  This being said, one of the huge contributions the University makes to the state is as a global university.  The fact that the University attracts talent from all over the country and the world is an asset to Washington State and its residents.  We believe that Washington students benefit when they are with students from other states and countries.  Additionally, UW grew up with Seattle – both are part of one another.  This is important because Seattle from its origin has drawn people from around the world – whether from Sweden, Norway, China or Japan.  Washington State and its young people benefit enormously from the University’s broad appeal and ability to draw exceptional talent to our part of the world.

With so much in the news about diversity and affirmative action, can you tell us about a time in college when you had an “aha” diversity moment – a time when being in a diverse environment yourself taught you something valuable?

This moment for me came when I went overseas to study.  For 5 years, I lived and studied with students not only from North America and Europe, but also from Kenya, Egypt, India, Indonesia, Korea, and many other countries.  Living and studying with people with amazingly different experiences of life and culture was an education in itself.  From this experience came the realization that diversity -- whether racial, socio-economic, or cultural – is in part about education.   Diverse student bodies lend themselves to enriched education for all students.  I experienced and benefitted directly from this truth.

I am emailing you to ask for donation to give to one of our Top 12 Seniors who will be attending University of Washington this fall.
Kimberly Gaona is 9th in her class of 558 students.

We recognize our Top 12 with a basket of items from the college they have selected to attend with the help of donations from those campuses. I would like to ask for a T-shirts (med), book bags or backpacks and a school pennants if possible and any other school related items you would be willing to share.
We will be recognizing our Top 12 seniors at a tea with their families on May 2nd, 2013.

Your help would be greatly appreciated.

Please contact me at the number below or respond to this email if you will or will not be able to help us provide a basket for Kimberly.